Here are the mathematics behind the technique:

Recapping from the proof, the formulae from Equations 3 and 4 are:

The links to the NonParaCont2 software specific models are provided here:

Note that in Crystal Ball, as F(x) changes from iteration to iteration, the Custom Distribution therefore needs to be capable of dynamic referencing.

Using this technique in a second order model 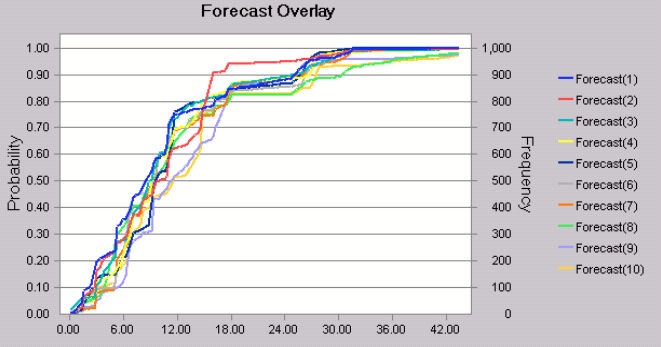 In @Risk the inputs to RiskCumul can be formulated as: =RiskCumul(min, max, {xj}, {Pj})

Using this technique in a second order model

There are a few limitations to this technique. In using a Cumulative distribution, one is assuming a histogram style probability distribution function between each of the {x} values. When there are a large number of data points, this approximation becomes irrelevant. However, for small data sets the approximation will tend to accentuate the tails of the distribution: a result of the histogram "squaring-off" effect of using the Cumulative distribution. In other words, the variability will be slightly exaggerated. However, the squaring effect can be reduced, if required, by using some sort of smoothing algorithm and defining points between each observed value. In addition, for small data sets, 'the tails' contribution to the variability will often be more influenced by the subjective estimates of the minimum and maximum values: a fact one can view positively (one is recognizing the real uncertainty about a distribution's tail), and negatively (the smaller the data set, the more the technique relies on subjective assessment).

The fewer the data points, the wider the confidence intervals will become quite naturally and, in general, the more emphasis will be placed on the subjectively defined minimum and maximum values. Conversely, the more data points available, the less influence the minimum and maximum estimates will have on the estimated distribution. In any case, the values of the minimum and maximum only have influence on the width (and therefore height) of the end two histogram bars in the fitted distribution. The fact that the technique is non-parametric, i.e. that no statistical distribution with a particular cumulative distribution function is assumed to be underlying the data, allows the analyst a far greater degree of flexibility and objectivity than that afforded by fitting parametric distributions.