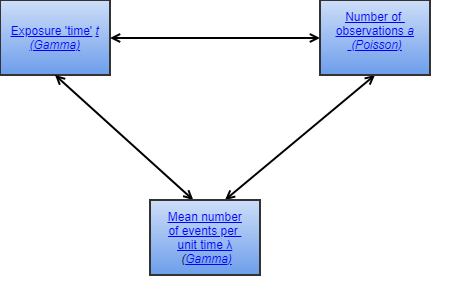 In the binomial process, there are n discrete opportunities for an event (a 'success') to occur. In the Poisson process, there is a continuous and constant opportunity for an event to occur. For example, lightning strikes might be considered to occur as a Poisson process during a storm. That would mean that in any small time interval during the storm, there is a certain probability that a lightning strike will occur. In the case of lightning strikes, the continuum of opportunity is time. However, there are other types of exposure. The occurrence of discontinuities in the continuous manufacture of wire could be considered to be a Poisson process where the measure of exposure is, for example, kilometers or tones of wire produced.

If Giardia cysts were randomly distributed in a lake, the consumption of cysts by campers drinking the water would be a Poisson process, where the measure of exposure would be the total amount of water consumed.

Typographic errors in a book might be Poisson distributed, in which case the measure of exposure could be inches of text, although one could just as easily consider the errors to be binomially distributed with n = the number of characters in the book.

In a Poisson process, unlike the binomial, one can theoretically have anything between zero and an infinite number of events within a specific amount of 'time', and there is a probability of the event occurring no matter how small a unit of exposure we might consider. In practice, few physical systems will exactly conform to such a set of assumptions, but many systems nevertheless in practice are very well approximated by a Poisson process. In the Giardia cyst example above, assuming a Poisson process would theoretically mean that we could have any number of cysts in a volume of water, no matter how small we made that volume. Obviously, this assumption breaks down when we consider a volume of liquid around the size of a cyst, or smaller, but this is almost never a restriction in practice.

The distributions describing the Poisson and binomial processes are strongly related to each other. In a binomial process, the key descriptive parameter is p, the probability of occurrence of an event, which is the same for all trials, so the trials are independent of each other. The key descriptive parameter for the Poisson process is λ, the mean number of events that will occur per unit of exposure, which is also considered to be constant over the total amount of exposure t. That means that there is a constant probability per second, for example, of an event occurring, whether or not an event has just occurred, has not occurred for an unexpectedly long time, etc. Such a process is called "memoryless" and both the binomial and Poisson processes have this property.

Like p for a binomial process, λ is a property of the physical system. For static systems (stochastic processes) p and λ are not random variables, but we still need distributions to express the state of our knowledge (uncertainty) about their values.

In a Poisson process, we are concerned with the number of events that may occur in a period t, the amount of 'time' one will have to wait to observe α events, and λ, the average number of events that occur, that describes the Poisson process. This section continues by showing how the Poisson distribution, which describes the number of events α that may occur in a period of exposure t, can be derived from the Binomial distribution as p tends to zero and n tends to infinity. We will then look at how to determine the variability distribution of the time t one will need to wait before observing α events, which also turns out to be the distribution of uncertainty of the time one must have waited before having observed a events. Finally, we will discuss how to determine our state of knowledge (uncertainty) about λ given a set of observed events α in a period t.

A quiz on The Poisson process:

Summary of results for the Poisson process