Selecting the appropriate distributions for your model

Finally, we have put together a table with links for each distribution as it fits into each category.

The most basic distinguishing property between probability distributions is whether they are continuous or discrete. Nonetheless, the literature is plagued with examples where the discrete or continuous nature of a variable is overlooked when fitting data to a distribution.

A discrete distribution may take one of a set of identifiable values, each of which has a calculable probability of occurrence. Discrete distributions are used to model parameters like the number of bridges a roading scheme may need, the number of key personnel to be employed or the number of customers that will arrive at a service station in an hour. Clearly, variables such as these can only take specific values: one cannot build half a bridge, employ 2.7 people or serve 13.6 customers.

A continuous distribution is used to represent a continuous variable, i.e. a variable that can take any value within a defined range (domain). For example, the height of an adult English male picked at random will have a continuous distribution because the height of a person is essentially infinitely divisible. We could measure his height to the nearest centimeter, millimeter, tenth of a millimeter, etc. The scale can be repeatedly divided up generating more and more possible values.

Properties like time, mass and distance, that are infinitely divisible, are modeled using continuous distributions. In practice, we also use continuous distributions to model variables that are, in truth, discrete but where the gap between allowable values is insignificant: for example, project cost (which is discrete with steps of one penny, one cent, etc.), exchange rate (which is only quoted to a few significant figures), number of employees in a large organization, etc.

Most risk analysis software provide truncation of its distributions. For example Crystal Ball does this using the truncation grabbers or by typing the specific boundary manually in the distribution window, e.g. : 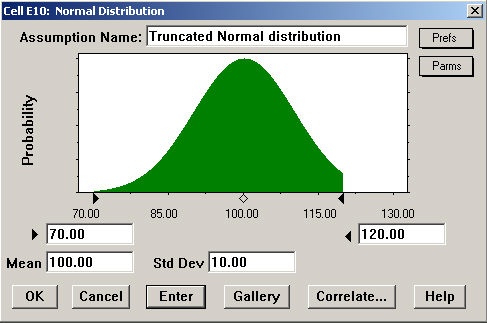 One can also build logic into the model that rejects nonsensical values. For example, using the IF function: A2:=IF(A1<0,ERR(),0) only allows values into cell A2 from cell A1 that are >=0 and produces an error in cell A2 otherwise. Crystal Ball eliminates the error values from its analysis of the simulation results.

Note that imposing arbitrary truncations is different from distribution censoring.  If you are faced with the problem of needing to constrain the tail of a distribution to avoid unwanted values, it is worth questioning whether you are using the appropriate distribution in the first place.

Fitting_ExtValue illustrates how to fit minimal data to an ExtremeValue distribution.

Those distributions that fall under the "empirical' or non-parametric class are intuitively easy to understand, extremely flexible and are therefore very useful. Model-based or parametric distributions require a greater knowledge of the underlying assumptions if they are to be used properly.

Parametric distributions should only be selected if either:

A plot of a first-order distribution is easy to understand. For example:

It's a bit more difficult to illustrate a second-order distribution. One needs to account for the parameter uncertainty, which is usually done by using a number of lines to reflect possible true distributions (sometimes called candy-floss or spaghetti plots):

The second-order cumulative plot is generally much clearer than its corresponding density plot.

The table below gives an overview of the various distributions described in ModelAssist, so that you can most easily focus on which ones might be most appropriate for your modeling needs. Follow the links for an in-depth explanation of each. We have used the most common name for each distribution. If you are interested in a particular distribution whose name does not appear here, try using the search facility because many distributions have several names, or are recognized as simply special cases of other, more common distributions.