We start our exploration of the binomial process by looking at the probability of a certain number of successes s for a given number of trials n and probability of success p. Imagine we have two binomial trials, there are four possible outcomes, as shown below, namely SS, SF, FS, and FF, where SF means success followed by failure, etc.

Now imagine that we have three trials:

In general, the number of ways that we can get s successes from n trials can be calculated directly using the binomial coefficient nCs, which is given by:

which is the probability mass function of the Binomial(p,n) distribution. In other words, the number of successes s one will observe in n trials, where each trial has the same probability of success is given by:

Examples of the Binomial

The four figures below show the distribution for a number of different p's (probabilities) and n's (trials). 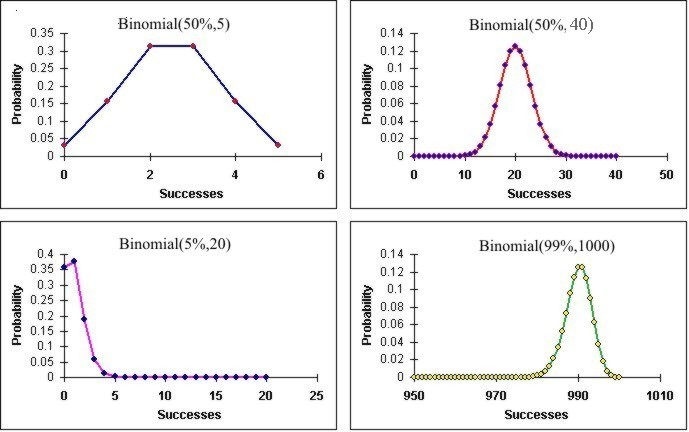 The first figure above shows the number of tails (here called success (s)) if we toss a coin five times could be 0, 1, 2, 3, 4 or 5 with the probabilities  displayed on the y-axes. The figure to the right shows the same situation, but now with 40 tosses. The most likely outcome is 20 tails , but it could be as low as 10 or as high as 30. Note that this figure looks somewhat like a bell-shaped Normal distribution.